TBT: A Look Back At Groupon And The Daily Deal Site Phenomenon 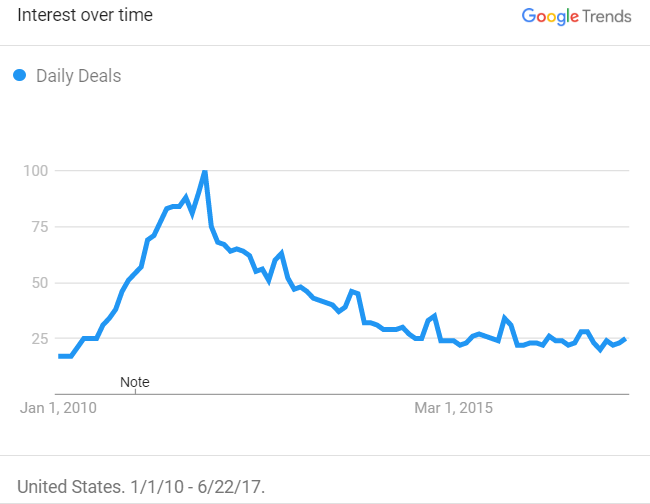 This week I saw an interesting article by Áine Cain on Business Insider about the astonishing rate that which tech companies are losing top talent in 2017. It is a veritable who’s who of tech giants. Groupon is #2 on the list and I started to reminisce back to the day when every client on the planet was both obsessed and petrified about daily deal sites. Everyone needed a POV on Groupon and whether it was good or bad for business. This phenomenon was so big in 2011 that I wrote an Adotas article about it and we immediately followed it up with a YouTube video (see below).

In 2011, Groupon’s growth rate was faster than Facebook. Google reportedly offered them $6 billion and was promptly turned down.  For reference, their current market cap is $1.75 billion. But, because nothing replaces anything, Groupon is still around and being a billion dollar company is nothing to sneeze at. However, I’m sure no one would have believed that 2011 would be the high water mark for both daily deals and Groupon as the Google Trends and Groupon Share Price charts illustrate.

In 2011, we got it right and it still holds up today. You are going to get new customers through daily deal sites and you are going to encounter Deal Seeker Syndrome. In a real life example,  I went to Google conference on local search in Mountain View shortly after this article came out and a nail salon proprietor from Maryland told me that she had customers from as far as 30 miles away that came in on the day of her deal. Some people drove past hundreds of nail salons to get their deal and they were never coming back again.

This example pretty much explains what happened since 2011.